Multifocal Retinal Dysplasia is an abnormal development of the retina, occurring when the two layers of the retina do not form together properly causing folds or round clumps (rosettes) to develop between them. The number of folds or rosettes can vary and may present as one or two small folds/rosettes, or they may be more numerous, but generally there is no noticeable effect on vision. The condition does not progress and often becomes less evident and may disappear with maturity. Irregularly shaped (geographic) areas of retinal dysplasia may also be encountered, although less common in the breed. In most cases, the lesions are frequently seen in the tapetal fundus dorsal to the optic disc. Litter screening is useful, although subtle changes are not always clearly defined, and unlike retinal folds/rosettes the geographic form does not appear to improve with maturity.

Another more severe case of retinal dysplasia is seen in some breeds with total retinal detachment and haemorrhage causing loss of vision, however there have currently been no reported cases of such in the Giant Schnauzer.

On average 29% of litters eye screened in the UK between 2009-2017 contained puppies affected with MRD, ranging from 1 puppy in a litter to all puppies in a litter.

Statistics recorded via the British Veterinary Association (BVA) on litter screens between 2009-2017 are shown below. The graph shows the number of litters screened for MRD for both affected and unaffected litters compared with the total number of litters registered.

MRD is congenital i.e. puppies are born with this condition and it is often detected at a puppy litter screen.

It is currently not known how MRD is inherited in the Giant Schnauzer, however it is thought to be a simple autosomal recessive gene which means that both parents of an affected puppy would have either one or two copies of the faulty gene. A minority of cases may be acquired during the puppy’s development, rather than inherited e.g. a viral infection during pregnancy.

In most instances there are no signs or symptoms, the eyes appear perfectly bright and clear, and usually there is no apparent effect on vision.

MRD is most often seen at a routine litter screen of the puppy’s eyes. Litter screening is a recommendation for breeders under the Kennel Club Assured Breeder Scheme. MRD may also be detected in older dogs, however there is a possibility that it may have improved or even disappeared with age. A list of eye examiners and their locations can be found on the following link:

Giant Schnauzers affected with MRD live a perfectly normal life and continue with their usual activities, sports, working etc. There is no treatment and generally it goes unnoticed.

Breeders are recommended to litter screen puppy’s eyes between the age of 5-12 weeks for MRD.

For over 30 years the BVA has operated a hereditary eye disease screening programme in conjunction with the Kennel Club (KC) and the International Sheep Dog Society (ISDS). MRD is currently monitored via the BVA sightings report, and as of January 2020 all eye results are published and recorded via the Kennel Club health results database and on registration documents.

Where to go for an Eye Test/Litter Screen

Eye testing is carried out by specialist ophthalmology vets who are listed on the BVA panel of examiners.

Requirements for an Adult Eye Test

1. Dogs should be permanently identifiable by microchip or tattoo, puppies should also be micro-chipped in order for a litter screen to be carried out.
2. Registration documents are required on the day of the eye test for adult dogs.

Ideally choose a breeder who has, or will undertake to litter screen their puppies for MRD before leaving the breeder.

Giant Schnauzer puppies should be eye tested before leaving the breeder, between the ages of 5-12 weeks, to determine if the puppy has been born with MRD. The breeder should be happy to talk to you about the litter screen and provide a copy of the official litter screening eye examination form. Puppies affected with a small number of MRD folds or rosettes, generally live a perfectly normal, happy and healthy life, usually with no noticeable effects. Retinal folds or rosettes generally do not progress, and in some cases may improve with age, or may totally disappear as the dog matures. However, if you are purchasing a puppy to breed from, you may want to discuss this and the litter screen, along with any other health tests, with the breeder.

Breeders are recommended to litter screen puppy’s eyes between the age of 5-12 weeks for MRD.

The BVA litter screen statistics show that the incidence of MRD has been quite high, between 40-5% of litters screened have contained affected puppies. Of the litters containing affected puppies the number of affecteds ranged between 9% – 100% of the litter.

In order to prevent MRD from escalating and potentially becoming more severe in the future, breeders have the opportunity to work towards reducing the incidence. One way this could be achieved is by litter screening at 5-12 weeks, before puppies leave the breeder, and selecting unaffected puppies for any future breeding. Also MRD may be reduced by removing affected dogs from a breeding programme if it is feasible without further restricting the gene pool.

There is a possibility affected puppies may later improve and MRD may not be detected in adulthood, this does not mean the gene(s) responsible for MRD have disappeared, they will still have the gene(s) and will still pass the defective gene onto their offspring. This is especially important since it has been suggested that breeding 2 affected dogs together may produce more severe lesions in the offspring.

The mode of inheritance for MRD has not been confirmed genetically, however it is strongly thought to be a simple autosomal recessive gene. Therefore both the parents that produced an affected puppy would either have one or two copies of the mutant gene. 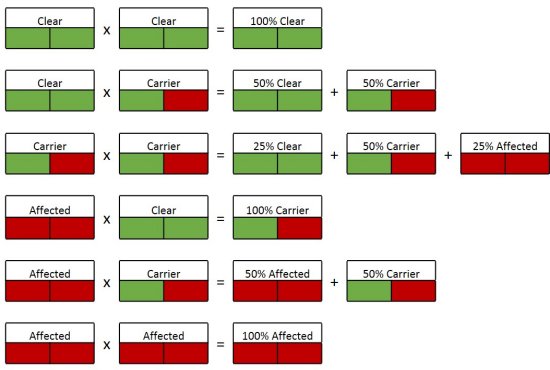 A ‘Clear‘ has 2 copies of the normal gene, is unaffected and cannot pass on a faulty gene.

‘Affected‘ dogs have 2 copies of the defective gene of which they will pass on 1 of the affected genes to their offspring.

A mating that may produce affected puppies should never knowingly be carried out.

How You Can Help

Make a Donation to the GSHF

The purpose of the GSHF is to provide monies for research into inherited health problems in the Giant Schnauzer. All donations gratefully received.